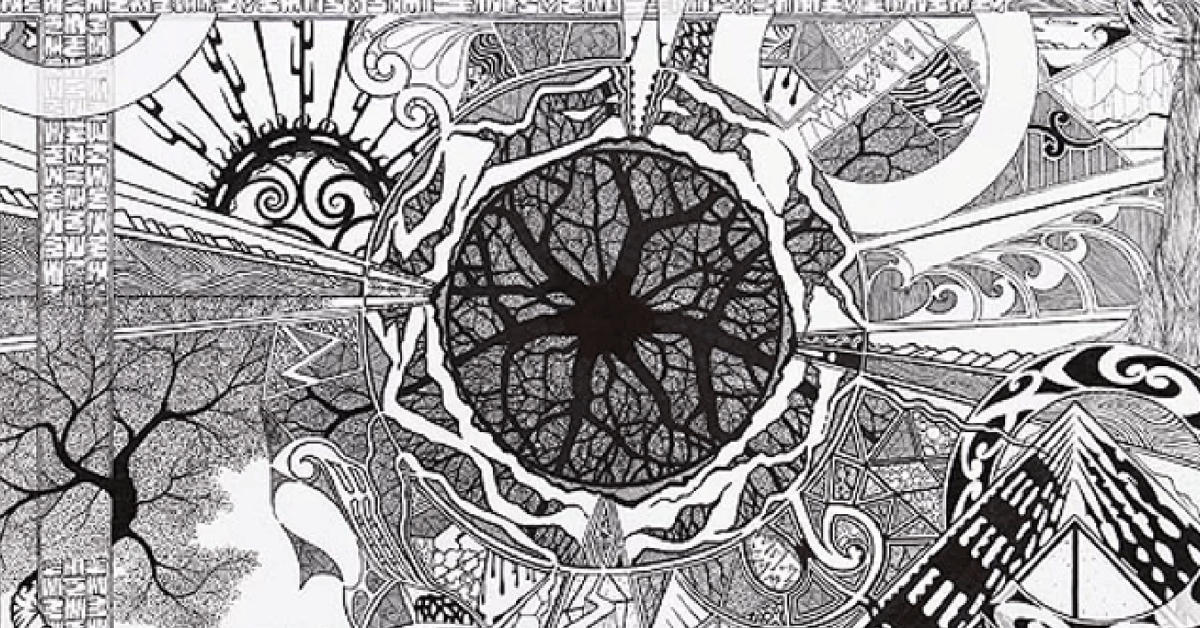 The multi-talented artist, Roimata Taimana, discusses his latest exhibition: Lens Pens Paper, his upcoming exhibitions: 10 Artists, his spiritual approach to making music, his desire to play a romantic role and the opportunity to celebrate the first publicly recognised Matariki.

Which waka did you arrive on?

For the last two years, six months and 26 days, I have been working as a mental health practitioner. I do support work for schools in Whitianga and Coromandel. Mondays and Wednesdays I work with rangatahi, working through their distresses and being there for them. The other two days, I work with whanau in distress, I love my job.

I’m an artist of sorts. Also, a singer songwriter.

How did you first get into the world of illustrations?

We do this thing called totu (like doodling). I’d just pick up a pen and start scribbling; it didn’t matter what the teacher was saying. I’ve been doing it since primary school. I would get told off heaps by the teachers.

I won a drawing competition and I’ve been drawing ever since. It was a Medusa drawing. It hung in the reception of my primary school for years.

What did you win?

One chocolate bar, some paper for drawing, a meat pie, a can of coke and a little bag of chips.

Would you say you’re more of an illustrator or a singer/songwriter?

When I sing, I am improvising the lyrics to the songs as I’m singing them. Actually I wouldn’t class myself as a singer/songwriter as such, because I don’t sit down and write songs. I am a singer/songwriter when I sing and create in that moment. I hardly ever perform the same song twice. Simply because I can’t remember the lyrics to my own songs. It’s easier to make them up on the spot.

Has singing what comes to you in the moment ever gotten you in trouble?

Only when I used to get drunk.

A little bird told us you were in Whale Rider and Once We Were Warriors?

I’m gonna have to tell them to shut up! But yeah, I was. I was the tough guy, I’m always the tough guy! I have an agent and I love the name of the agency: Robert Bruce’s UGLY Agency!

Funny story. My older brother came into wardrobe one day. He was sitting with the girls. We called the makeup artists and wardrobe butterflies or little birds, because that’s what they do all day – just get everything done. I’m standing there and one of the wardrobe girls asks me to try on some leathers but none of the leathers she has fit. She asks, ‘Do you happen to have your own leathers?’ Yeah. ‘You got boots?’ Yep. ‘The whole shirt? Jacket?  Why don’t you bring them in, and we’ll have a look at those?’ So, my brother grabbed them and brought them back. While I was getting changed into my own clothes, my brother leans over and he goes, ‘So, tell me bro, you get paid and you only have to do this? You get paid to look like a gangster?’ Yeah. ‘Oh, so you get paid to be you, bro?’ Yep. I’ve been waiting for a romantic role; it just hasn’t come along. I’ll just keep playing the bad guy.

So, you’re an actor, singer, not a songwriter and an illustrator. Any other artistic talents we should know about?

I used to carve, mainly bone. I started carving again recently, mainly in wood and just spending some quality time with it.

How did you meet the Lens Pens Paper guys – Ian Preece and Phillip Fickling?

I got asked this question the other day actually, I really have no idea! One day I just met them and now I feel like they’ve been around for all my life.

How is Lens Pens Paper going?

I don’t know about the boys. As far as I’m concerned, and this is my own opinion, but the day that I sold my first print, I was happy. I don’t care if I sell anymore. If I sold one. At every exhibition that we do, then I’m happy. it doesn’t matter whether it’s the $90 print or whether it’s a $2,500 print, so long as one gets sold. It means that we’ve done it.

Which one did you sell first at Lens Pens Paper?

The first one I sold was of Te Ika-a-Māui (the North Island). The Island with its hands spread out. The first one was sold to a local lady, a gentleman from Thames bought the second one.

What was it that resonated with them?

The gentleman that bought it said that he was a diver and used to dive for a living. Just to have that image of Te Ika-a-Māui meant a lot to him. When I told him the pūrākau (story) of Te Ika a Maui (The fish of Maui), he was like, wow, it’s even more important now.

What is the story behind it?

How was your Matariki weekend?

When we were growing up, we never celebrated Matariki. It wasn’t a part of our life because our mothers’ and fathers’ generations and their mothers’ and fathers’ generations were in that that era where you were not allowed to speak te reo Māori so there was no teaching or learning of Māori. They only celebrated in their own house because they weren’t allowed to talk about it at school or in public so we kind of lost that connection. It was beaten out of them, so they stopped.

Having had the opportunity to now celebrate our very first recognised Matariki as one of the most important days to Māori because it’s our New Year. A time of reflection. A time of acknowledging those that have passed, those that are here now and those that have yet to come in. It’s a time to collect as a farmer and be as a farmer. It was huge. It was awesome.

When did you learn Te Reo?

Do you sing any songs into Te Reo?

Very minimal. I sang about a Rangi and Papa. And being in the space of Te ao Maori, actually, I really can’t remember what I sang about totally, but I enjoyed it while I was in the zone.

You recently did a stunning moonrise collaboration with Ian in purple hues. Do you do any illustrations in colour?

I have trouble putting colour to a picture. Sometimes I put one colour to a picture, like a red background while the rest is black and white. I am exploring the workings of procreate, digital, which I’m having mixed feelings about, so we will see how that pans out.

If you could take one piece of Ian’s and one piece of Phil’s work from Lens Pens Paper and hang at home, which pieces would you take?

Easy. Angel Wings from Ian; Nail clippers from Phil. I like the simplicity of the nail clippers. Nail clippers are an annoying part of life and paper ones are useless. Love it.

Do you think you’ll do another collaboration with the Lens Pens Paper guys?

They probably won’t ask!Yeah, happily.  Maybe in another year or two.

It’s such a great name for the exhibition.

You’ve got your Queenstown exhibition. What else have you got coming up?

My friend in Queenstown has been trying to get me down the last two years but because of Covid, the bloody C-word, we haven’t been able to get it going. We’re now looking at going down in September to do the exhibition. It’ll probably be along the lines of what I’ve just been doing at Lens Pens Paper.  My friend asked me how many pieces I would put out. I said, oh, I’ll put in 12. She was like, wow, you’re gonna give me 12? So now I’ve gotta come up with them.

We’ve also got the 10 Artists in October over Labour Weekend. So, there is lots in this New Year to look forward to!

What about your music? When can we hear some of your singing?