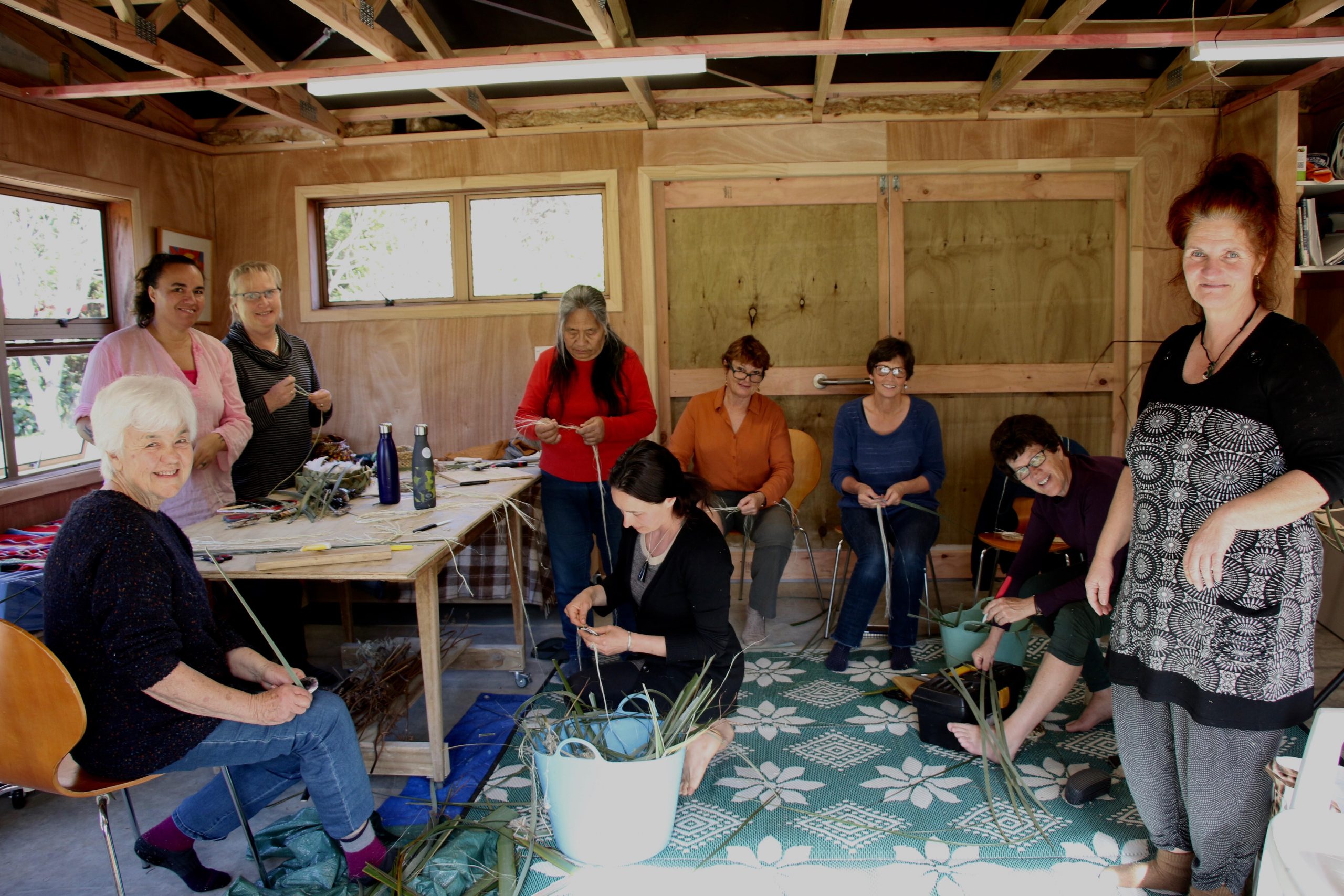 The hands and hearts of people across the community are being invited to contribute to a special artistic creation to encapsulate the spirit of Mercury Bay’s upcoming Tuia 250 commemorations.

Members of the Coromandel Weavers Collective – Nga Turuturu o te Tara – have planned and coordinated the Taura Here Community Project which will bring together the combined efforts of all who would like to participate in creating a spectacular “Star Waka”. The vision of a symbolic waka in a star-studded universe is already taking shape. Children at Tairua School were among the latest to make their mark on the project having enjoyed a day working with several members of the collective.

“We had a wonderful day at Tairua school where all the children made stars. They loved it! While they were making stars we were discussing topics including star navigation, Captain Cook and also how their families and ancestors travelled to be here in Aotearoa,’ says coordinator Lizzy Leckie. “What is great about this project is that all ages can participate and be involved. So we are really trying to encourage families to come along.”

The Star Waka will be located in the Raranga tent at Whakau Reserve/Taylor’s Mistake, Whitianga, on Saturday 19th and Sunday 20th October, a huge weekend for Mercury Bay and the wider Coromandel as the first encounters between the local iwi of Ngati Hei and Captain Cook’s Endeavour crew 250 years ago are remembered. “Together the waka and the stars symbolise the universe and the binding of ira atua (the realm of the gods) and ira tangata (the realm of humans). It will acknowledge past, present and future voyaging to and from Aotearoa in all directions, with the stars reflecting navigation patterns over time and space,” Lizzy explains.

The community will be invited to take part by making stars from bracken, harakeke, ice cream sticks and wool. These will be suspended in the tent and those who come along will also have the opportunity to attach bundles of feathers to the frame of the waka. Star Waka is the name of a book of poems by Maori poet, Robert Sullivan, who will perform poetry on both Saturday and Sunday at 1.00pm. Following the poetry reading, the community will be invited to come and receive stars – the notion being you give away the first thing you make and receive someone else’s as a gift to take home.

Renowned Kuaotunu based sculptor, Chris Charteris, has designed the waka structure which will be brought to life with the creations of the Coromandel Weavers Collective with the help of the community.

“Everything about waka is inspiring, whakapapa, the science, navigation, youth involvment, knowledge passed to future generations and environmental awareness. This  and my love of weaving  is what inspired me to get involved in this project,” says Lizzy.

Nga Turuturu o te Tara is made of up of local weavers supported by Ngati Hei advisor, Raukawa Balsom. The group has been mentored by Dr Maureen Lander of Te Hikutu, Ngapuhi, a multi-media installation artist who has exhibited nationally and internationally since 1986. From the early 1990’s until 2007 Maureen taught Maori Material Culture courses at Auckland University. “Star Waka is all about manaakitanga, providing an enjoyable experience to all who would like to join in and be involved,” says Maureen.

The collective of weavers will also present weaving demonstrations throughout both days so people can see beautiful works in harakeke being created. “Just about all the preparation is done and our project is all set to go. After the weekend, Star Waka will be moved to the old fire station building on Monk Street, Whitianga, to be shown along with the NgArti exhibition which runs until October 28th,” says Lizzy.

Pictured are Nga Turuturu o te Tara preparing muka to bind feathers which will go on the waka.