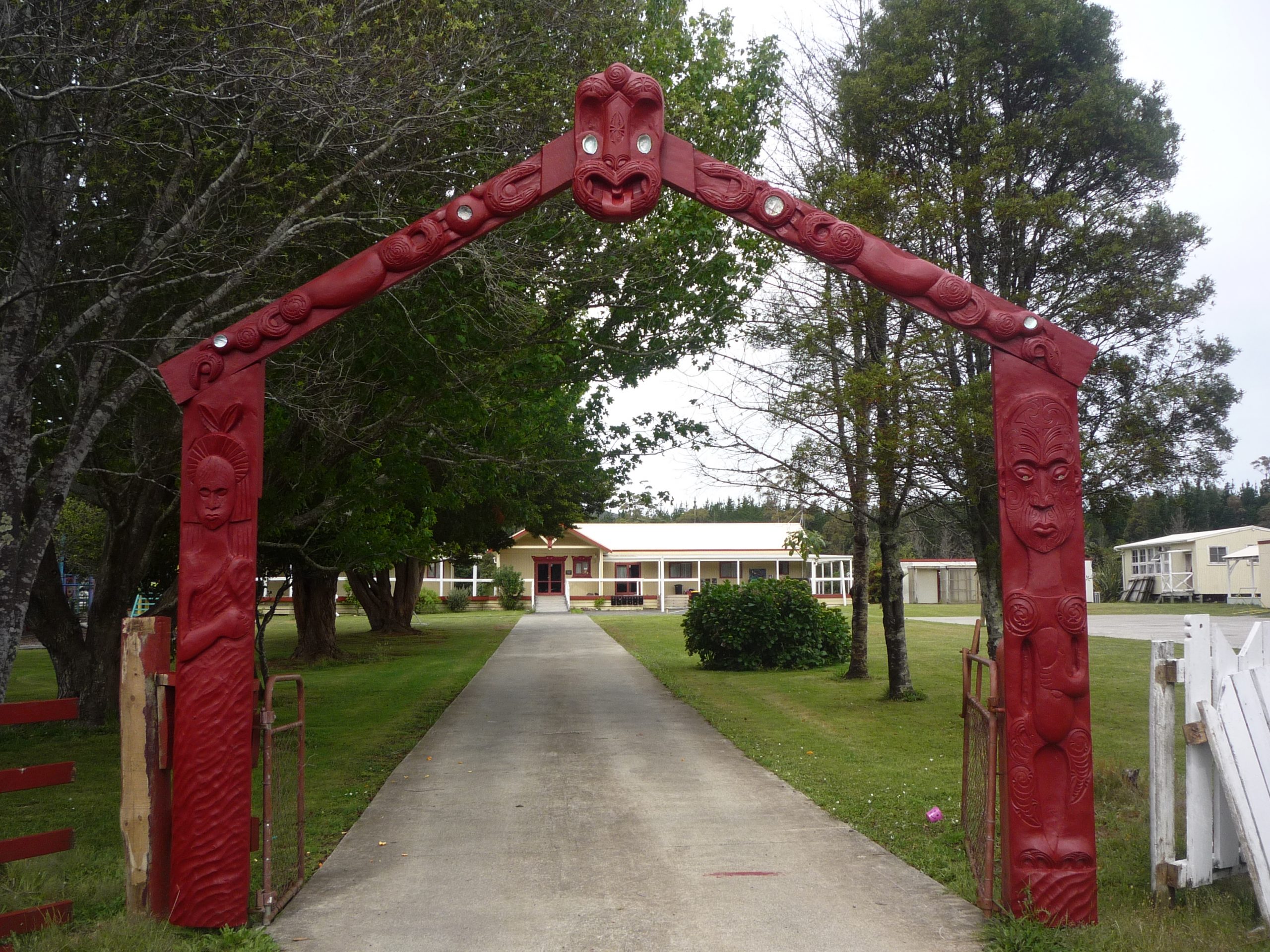 New waharoa is a labour of love

In one the Coromandel’s smallest schools, nestled in the peaceful shelter of one of the east coast’s most beautiful bays, teacher and principal Mereana Maika-Angus is fulfilling her final duties before leaving the role she has held for the past ten years.

It will be a bittersweet farewell when she takes her final roll call at Te Kura Kaupapa Maori o Harataunga in Kennedy Bay, the school that was essentially started by her mother Taihaere Maika nee Harrison. “The existing school at Kennedy Bay was to be closed. Mum was a teacher at Coromandel Area School where she had established the first bilingual unit. At the time we were seeing the start of the first integrated kura/school to follow on from the kohanga reo which allowed children to continue their education in te reo. The community asked my mother to run a kura kaupapa Maori in Harataunga so that’s what she did with the help of my father.”

Mum, Taihaere, and dad, Hirini, have now passed, but Mereana’s connections to the place she calls home still run deep. “We are a small community, many of us are the same whanau, I’m now teaching my great nieces and nephews. Even though we are in the Hauraki, we are Ngati Porou. Our ancestors came here from the east coast around Gisborne in the 1800s and we have been here ever since.” The history is important as it underlies Mereana’s determination and sense of duty that spurred her to accomplish one special task before her departure – the creation and installation of a new waharoa/gateway at the entrance to the school.

“A new waharoa had been put in place when our school was renovated in 2001. Unfortunately, it was severely damaged during an event around five or six years ago. Replacing it was always going to be huge job for us. But we had been saving for the last few years and it was something I really wanted to get done before I finished up,” Mereana explains. So Mereana, with the support of the school and the marae set about the process of ensuring she could say her goodbyes knowing the school would stand ready to welcome their new tumuaki/principal in February.

“We first tried to track down the person who had carved the original waharoa. We eventually found him up north and he agreed to do it, but unfortunately he did not complete the job. So in order to help us get it done by the end of the year, our own carver, Freddy Harrison, took it on for us and we are so grateful to him.”

The school could hardly have found a more suitable craftsman than Fred, who learned his skills working alongside his father, the late Pakaariki “Paki” Harrison regarded as one of New Zealand’s finest ever master carvers. Honoured with a Companion of the Queen’s Service Order for community service in the Queen’s birthday honours of 2002, Pakaariki was named a living icon of New Zealand arts by the Arts Foundation of New Zealand in 2005. Along with his wife, Hinemoa (nee Rakena), – herself a noted traditional weaver with a particular skill in tukutuku panelling – he was responsible for the construction of ten wharenui/meeting houses across Aotearoa, including at the Harataunga marae.

“We are just blown away by what Fred has done. The maihi (the apex) has two taniwha which are specific to Ngati Porou. In the middle there is a tekoteko (human form) which represents our ancestors and our kaupapa. Finally, the ako (posts) represent my parents who were the foundation for our kura,” Mereana explains.

“We have also set aside any pieces from our old waharoa that we could save and our whanau are going to incorporate it into a playhut for our tamaraki in the style of a model wharenui” she adds.

Seeing the new waharoa standing proudly in place ready to welcome all-comers to Kura Kaupapa Maori o Harataunga, has brought Mereana, pride, relief and gratitude. “So many people have helped to make it happen. We fundraised locally, lots of galas and our whanau were so generous. We also received a grant from the Creative Communities Scheme which was wonderful. Of course, there is a great personal satisfaction for me, but this is something for the entire community to be proud of.”