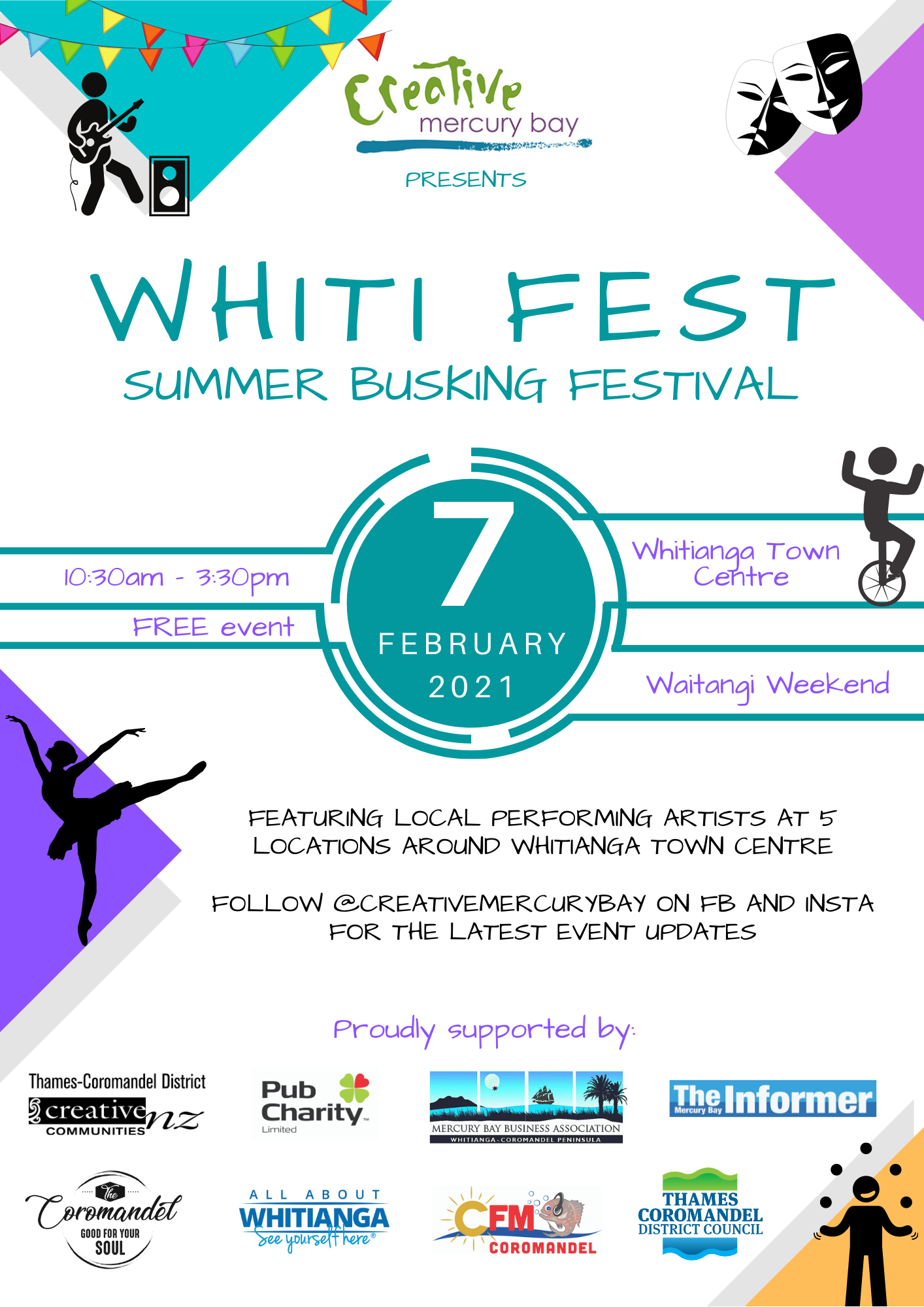 Dotted across the Coromandel Peninsula are a range of not-for-profit arts trusts and organisations that work hard to champion the arts in their communities. One such arts trust is Creative Mercury Bay, who focus on facilitating performing arts events and workshops for the Mercury Bay region that are engaging, enjoyable and keep the performing arts alive in the community.

Since 2012, Creative Mercury Bay Trust (also known as CMB) has delivered an annual programme of performing arts events – up to around ten events per year – to the community of and visitors to Mercury Bay.

Their first event as part of their 2021 programme is Whiti Fest; Mercury Bay’s first busking festival.

The five performance locations will be Whakau Reserve/Taylors Mistake, the corner of Hannan Road and Albert Street, Memorial Park, outside the Mercury Bay Museum and the grass area by the Whitianga Marina.

Preparations for the event began in December 2020 with a callout for performers in the Mercury Bay region. The Creative Mercury Bay team received an overwhelming response, and 20 performing artists have been selected for the Whiti Fest lineup.  Each artist will perform two 20 minute sets at two different locations, so people will have the opportunity to view as many of the performances as possible.

Local musical duo Let’s Go Descarrego aka Stewart Pedley and Leo Magri are the official Whiti Fest ambassadors, roving the streets during the event with special unplugged performances, and then closing the event with a set at Whakau Reserve. Click HERE to listen to an interview with them on Coromandel’s CFM.

Each performer will be paid a modest fee for their performance, and like a traditional busking festival, will be able to put their hats out for koha or sell merchandise if they wish.

“This is Mercury Bay’s first summer busking festival and we want to make it a true celebration of the performing arts”.

“Whiti Fest wouldn’t be possible without funding from Creative Communities Scheme and Pub Charity,” she says. “We are very appreciative to both funding bodies for their support. The hope is that we can make Whiti Fest an annual tradition in Mercury Bay.”

“Each one of these organisations have helped us promote the event, whether it be through sponsorship of advertising, promotional packages or spreading awareness of Whiti Fest through their networks,” says Anusha. “Special mention goes to Mainly Casual and the Mercury Bay Museum for agreeing to provide power for the two amplified locations.”

“All of this generosity has made Whiti Fest a genuine community performing arts event, which was our aim from the onset.”

You can download a copy of the Whiti Fest event schedule and map HERE.