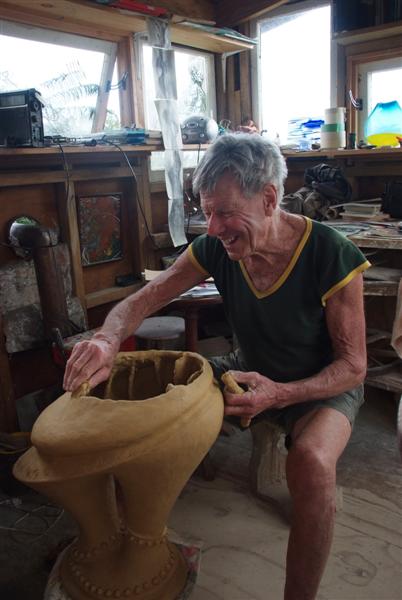 The spirit of the late great Barry Brickell will be alive and well in Coromandel Town on Anniversary Weekend when talented potters and clay artists from around the country will come to share their craft with one and all.

The second annual Barry Brickell Play with Clay Day on Saturday, January 25th, will take place at the Hauraki House Theatre, Kapanga Road, in historic Coromandel Town, with the aim of keeping alive the memory of the legendary artist and visionary who contributed so much to the town and the wider peninsula. Organiser, Pete Sephton, says the small team behind the event all had a close association with Barry and started the Play with Clay Day as a fun tribute. “This year was the first one and we had such a fantastic response. Obviously we only have a small number of potters here on the Coromandel but, when they heard what we were doing, people who knew Barry from Whangamata and even as far as Auckland came to help us out,” he says.

Next January’s event will see around six to eight potters in attendance to help and guide members of the public who want to come and have a go. “We’ll have two or three kick wheels and an electric wheel. It’s all free of charge and it was especially exciting seeing so many kids coming along to enjoy it and we hope for more of the same next year,” says Pete.

With a celebratory atmosphere, including live music on the Barry Brickell Memorial Stage, the inaugural clay day attracted and estimated 250 visitors throughout the day. Pete emphasises that the event is open to other artists also. “Last year we had screen printing demonstrations that the public could also try their hand at. We would welcome any creatives who would like to be involved by sharing their skills with others to get in touch.”

“We are also inviting some community groups to come along and provide food this time as a fundraising opportunity. The day will run from 10am until 3pm. Some of our local musicians, including Whitianga band Soul Sax, will be performing on the stage.”

Reflecting on what his friend, Barry, would have made of it all, Pete has no doubt. “He would have loved it. He used to do this sort of thing back in the day. He’d set up out in the car park – it was mostly aimed at potters, but people would come along to check out what they were up to and join in. This is just a small way to help ensure that the inspiration he gave to so many is carried on.”

Pete says the way the community has supported the day has been amazing. Funding has been provided through the Creative Communities Scheme, administered by Creative Coromandel, while the marquee has been loaned free of charge by the Spirit of Coromandel Trust.  “Then of course there are all the people who participate and contribute on the day. It really is a big community effort and we’re looking forward to welcoming lots of visitors on January 25th.”